Trading with the enemy

... there are in our midst companies which masquerade under the guise of Australian companies, but are controlled and influenced very largely by enemy subjects, existing and carrying on their operations ... for the benefit of enemy subjects.

One of the first casualties of World War I was international trade. Before the war most of Australia's trade was with Britain, although Australia's economy was opening up to trade with other countries. German interest in the Australian mining and metal industries, vital for the rapidly industrialising country, was viewed with suspicion by some. Upon the outbreak of war, 'trading with the enemy' was quickly made illegal; how could enemy companies and citizens continue to make profits through the hard work and resources of Australia?

The transferring of enemy owned businesses and the cancelling of contracts allowed Australian mining and metal companies to expand and grow. Prime Minister William (Billy) Hughes saw a future Australia which was engaged in trade only with the British dominions. This view was not universally supported, especially as many could see the benefits of engagement with the rapidly growing United States of America. Why it became necessary to have an enemy contracts annulment bill in Australia, reprinted from the Statesman and Mining Standard, 1915 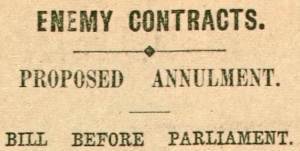